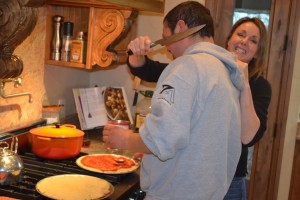 I’ve always said, “You never know what’s going to happen when you get up in the morning”. Phil Gritton was driving in from Olympia with a big bin we commissioned that would get my garbage cans full of birdseed off the porch and out of sight. Turns out, the bin was so heavy that he recruited longtime friend and business colleague Mike Rutledge to help him deliver it. Mike is Director of Kitchen Operations at Farrelli’s Wood Fired Pizza with their multiple locations. Two hungry men pulling into Adytum at nearly 1pm….”Pizza sounds good…”so I started the gluten free dough from scratch.  I texted Phil to see if Mike could handle more pizza and got the go ahead. By the time they arrived with the bin, the pizzas had risen, were shaped and had pre-baked and were ready to top. That’s actually when it all fell into place; the unexpected miracles that days can bring…. 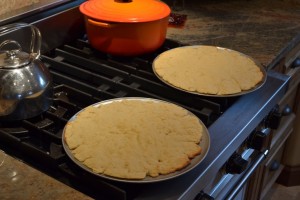 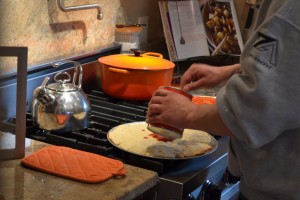 Mike agreed when I asked if he’d finish them off. As he worked with seasoned grace in a new kitchen, he let us know he was 1 of 100 Certified Pizziolas in the United States. He has won pizza making contests against professionals from Italy and recently had taken First Place at a competition! He and Phil have worked together in the past before Phil went on to the Culinary Institute of America in Hyde Park, NY. More recently Phil turned to Finish Carpentry for Elite Builders NW in Olympia but the blood of the chef runs deep and forever. In fact, Phil’s created the recipe for a salad at Farrelli’s when he was 17 that is still a top seller. So to have two professional chefs in the Adytum kitchen seemed providential as we’re expanding our breakfast menu and are looking for some fresh ideas. 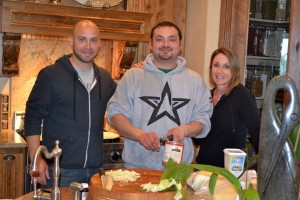 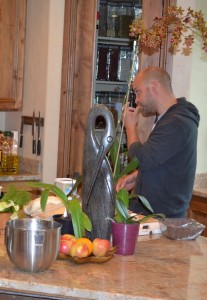 It’s taken many failed attempts on my part to finally make a decent gluten free crust. Mike began teaching from the prep bar while topping the pizza shells I had pre-baked. I noticed he wasn’t piling things on like we do.
“Use toppings sparingly: distribution of ingredients is key and having the pizza well-seasoned. Don’t overdo the salt but getting enough on is an art – too much and you’ve ruined it.” He explained as he put goat cheese around the circle, “You want a bit of goat cheese in every bite, but not too much in every bite. Top to the crust…you don’t want to see a huge edge left on your guest’s plates when they finish” 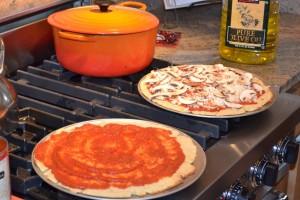 One thing I was completely unaware of is the real chemistry about dough. Mike explained,
“The art of baking is moving moisture – you are cooking the water out of things. You want steam release, Kat, so next time leave a quarter sized hole in the middle of each pizza so that a steam release passage is created. If this wasn’t on the vented pan you have it on, but was directly on a pizza stone (I had the vented pan ON the pizza stone- per prior instructions by pizza chef at Pizzacata in Portland) then you would need to put in on a rack to cool or the bottom will be soggy.”
Well, we know about soggy bottoms….embarrassing as a toddler and humiliating as an adult with guests expecting something great. 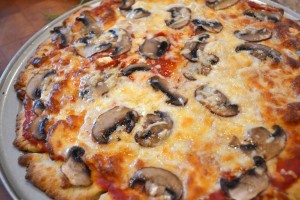 At the table Mike pronounced my crust “really good” and said if he wasn’t aware it was gluten free, he wouldn’t have known. Another chef at Pizzicato in Portland- now serving gluten free – advised me to use a lot of olive oil to shape the dough into the round, and liberally oil the  vented pan to give it some crisp and to bake on a stone. He also suggested that I coat the top with olive oil before baking at close to 500 degrees for about 10 minutes on the pre-bake. (The directions said 425…)The second bake was 10-15 minutes with the toppings on.
I lost track of the time it was in as the men all went out to move the big bird seed bin off First Light Suite. 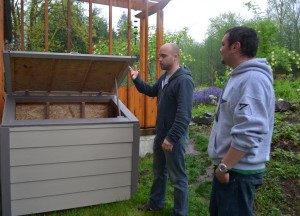 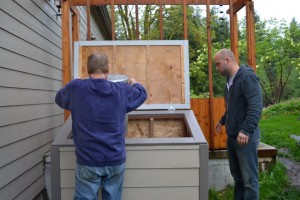 Meantime, during the first pre-bake, I’d slipped off to the woods to wildcraft some wood sorrel. As a child, sitting cross legged in the grass near the edge of my parent’s garden, I used to strip the unusual tartness from the stems and move on to the next one.

I left the clover tops attached without eating them; didn’t know I could nor did I know it was called Wood Sorrel… Tom Douglas, owner of Dahlia Lounge, Serious Pie, Etta’s, The Palace Kitchen and many more top notch Seattle restaurants featured this salad on his menu at Serious Pie, where I went on Mother’s Day with Donn and my daughter, Alyssa. 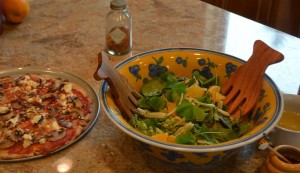 It was her idea to try it…sounded kind of weird “Wood Sorrel, maple, orange and fennel” – all in lemon vinaigrette and laced with local honey around the perimeter of the small, composed and pricey salad. I didn’t realize wood sorrel was the exact same Oxylis we had growing wild at Adytum; the same I ate as a child… and that the maple- which they assured me tasted like maple- was dropping all over our walkways when the birds weren’t eating it. The fennel and orange came from the market and coalesced into in a beautiful, fresh dish to compliment the scrumptious pizzas; the best we’ve ever had and by a famous Pizziola no less! 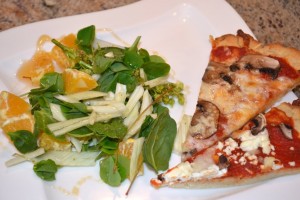 We have plans for breakfast pizzas for Adytum guests. When I asked Mike and Phil if anything came to mind, Mike offered the idea for a quiche brushed thinly on top of the pizza crust base, topped with potatoes which were mandolined into the thinnest possible rounds. (Potatoes always get a rinse and a good drying to remove the starch before baking) Then he suggested toppings like mushrooms, garlic and whatever sounds great in a quiche basically. 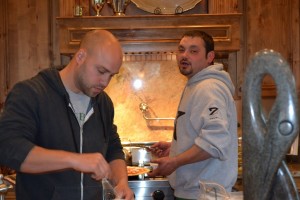 Phil suggested country gravy. Since Adytum is a vegetarian kitchen I said, “Like a hearty mushroom” thinking of the beefy Portabella ~ sounds great! Topped with mushrooms, spinach, garlic, roasted red peppers it really would be like many of the hearty breakfasts we are already making but in a pizza. 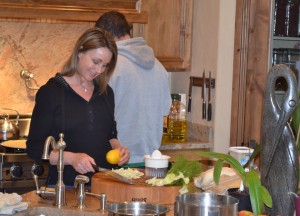 “Ok, so what about a dessert breakfast pizza?” I asked, realizing how fortunate I was for this private session with two top chefs.  Mike had been talking about discovering the recipe for the base for award winning Pizza Sole, one of Donn and I my favorites from Casa Mia in Olympia. We had that pizza on our first date after seeing “Bridge Across Forever” so there’s a fantastic association for us. Mike learned it was a base of gorgonzola, parmesan and olive oil and sea salt all blended together. Phil began talking about gorgonzola, candied walnuts and pears sliced thinly on a mandolin….and on that base…pure heaven at the breakfast table. So that will be our next adventure…. 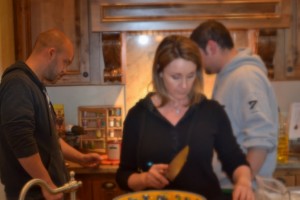 The guys were now clearing their plates and getting ready to leave. An unexpected private mentoring from one of the top 100 Pizziolas in the United States and brainstorming menus for the Adytum Retreat kitchen…and one amazing bird seed bin….you really never know what’s going to happen when you wake up in the morning!