Biking the tulip fields in the valley below Adytum Sanctuary heading to the little village of Mossyrock, Donn sees a drone. There is an amazing amount of little boy left in this man. Abandoning me astride my bike on the side of the tulip field, suddenly he is halfway down a long row of red tulips to talk to the operator, “Edgar” from Centralia about his drone. Edgar made the half hour drive to get an aerial on what I’ve called in the past, “The Flag of the World;” tulips that form a stunning block of dazzling color after a long winter. 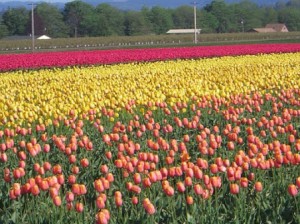 This is the first year I’ve seen drones over the tulip fields off Highway 12. It seemed everybody was coming out to the country on a perfect day to enjoy the spring color in Mossyrock, Washington. Village life is good, I think. I just bike a few miles and here they are, year after lovely year. We can see them from Adytum Sanctuary splashing the valley floor with color below. 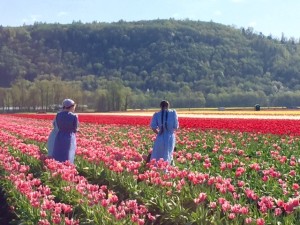 This day, I heard many languages spoken; watched selfies taken against the backdrop of the bold standard, and saw an Amish family and children racing between red, yellow, and pink blooms. I realized I completely lost my biking partner when Donn and Edgar crossed under the viaduct, a tunnel under busy highway 12, when Edgar lost his drone. He’d dispatched it to photograph the adjoining tulip field where a raucous mix of every colored tulip highlighted the little chapel, Lady of Guadalupe.

This chapel was presumably built for the farmworkers who are responsible for creating all this beauty in often harsh weather conditions I know firsthand having planted hundreds of grapevines and Douglas Fir; daunting to say the least. Cold rain running down the back of one’s jeans in February, freezing hands, and dismal skies yield delayed artistry when the focus on the Earth explodes in March or April. I sometimes find monetary “tips” a strange concept. In other words, if anyone deserved them, it is the artists who created this beauty, co-creating with God, from cold Winter Earth. Our thanks and true gratitude will have to do here. You have made pure theater. We thank YOU all!

Needing to refill my “well,” I reached my ‘moment’ today after having my senses reawakened through biking. Registering every nuance, every bird too heavy-bodied with the lush bounty of Spring to even attempt to fly, I refilled to overflowing. Five Canada Geese who normally would startle at my rocky-road passing, and the attendant dust and noise, simply waddled away as I passed them on a country road. We are all feeling the liquid seduction of Spring. Let it take you; work its magic on the winter of your soul regardless of the season of life you’re in…Spring is eternal, that we know. And it’s within us all.

64 perfect degrees and stopping at the wooden-floored old market, soon I had a zucchini in my pocket for Naan bread Donn would make. Stopping next at the post office, wondering what pocket was able to accommodate my few envelopes, he appeared again to take them, having located the drone and rendezvousing successfully with me. He let me know Edgar would come soon with his drone to take pictures of Adytum Sanctuary, certainly before Spring surrendered to Summer. 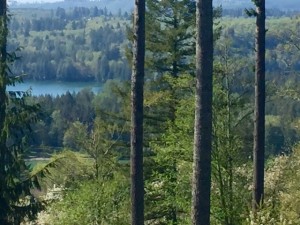 Pedaling back to Adytum over the rocky road by the tulip fields, an Osprey carrying a big branch in its talons stroked with determination through the crystal sky. Azaleas bent over with the weight of their blossoms and dogwood and tulip trees fresh with crisp mountain air filled my awareness. Startling ducks into flight from their water-world in a roadside ditch, gratitude overwhelmed me for this now 20-year old bike. I jokingly call it my $2000 cellulite treatment but it’s the truth. Give me a month on this old Santa Cruz and I will be back in good form after the more sedentary lifestyle of winter. Taking in daffodils, red robins, and cherry trees loaded with promise, I set my course for Adytum with firm resolution. 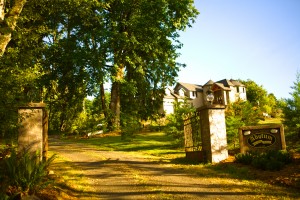 The drones over the tulips were the forerunner to hosting a radio pilot group at Adytum. Several who came were pilots and most were radio-controlled operators, “pilots with two feet on the ground.” June Edwards, my nearly 89-year old Mother told her tales of adventure for well over an hour to their rapt attention and ours. Just as with the drone-pilot world now, women in aviation were sparse back then. I had no idea of the gender bias evident now in the drone or radio-controlled field now. 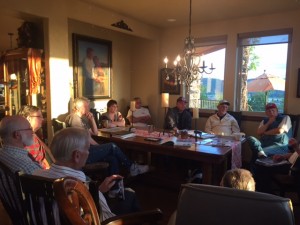 The 15th woman helicopter pilot in the free World, a parachutist and wing-walker in air shows, and president of the California Aerospace Education Association, June told of being forced down by the Cuban Air Force for invading air space and visiting Morro Castle, a fortress guarding the entrance to Havana Bay. Later, pioneering crop-dusting in Cuba, Jack Reynolds, her pilot husband, and she had planes seized there but after witnessing the piranha pool just off the torture chamber at the Castle, she was glad to get out with their lives, lost planes or not. Leaning too far over the small body of deep water, she was told, “You don’t want to do that.” The boiling surface revealed much about the history of where bodies disappeared after entering Morro Castle’s torture chamber. 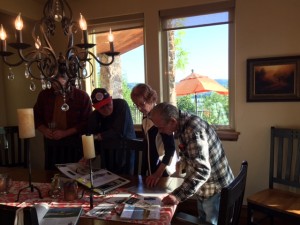 Later, running two airports in two different States after Jack’s death, she hired Wayne Edwards who later became my Father, to fly to keep the business and the growing family together. Jack’s children and hers with Jack were still under her care. My siblings were reared in planes and hangars, flying in the hopper (which is where the chemicals were stored to be dumped below on unsuspecting vegetation; life was more relaxed back then before the chemical world exploded and we knew so much more…) and in a laundry basket at June’s feet in light aircraft while unscrewing key parts for amusement on long flights creating an emergency in the air…We heard tale after tale but the most poignant was marrying the man who took her on her first flight in an open cockpit plane straddling his lap, holding crossbars with one leg out of the plane; doing 18 loops to get her back to school in time before class. She didn’t make it back in time and life forever changed…the romance of an era now lost in time was forged and path in life emerged. One flight changed her whole life and the life of women in aviation history.

The group begged for a book and also one that included my Father’s stories as well before the skies lost their freedom; when it was cheaper to take a flying lesson than go ice-skating (which was how he became a pilot) and a career was born; when you could dump a hopper full of water on someone below for a prank and not be sued. When a flying bird could intersect with your temple and create a crash in an open bi-plane that brought death remarkably close; when the woman you loved still married you despite 100 facial stitches (without anesthesia) a few days before the wedding. When I realize how close I was to not being born at all…

We aim to locate funding for a documentary of this era of flight when the skies were truly quite free and flying was fun, when rules didn’t exist, and weather was the only threat. It is interesting that flight has found its way into Adytum Sanctuary when we simply biked from Adytum to look at the tulips. And the story comes full circle. Castles in the sky. Dreams. Destinies entwining. Perspective is everything and getting up on the “balcony” of life reveals a much bigger life than we ever imagined full of adventure, mystery, and most importantly: love. Always love.