Will Codex and the Drug Companies Raid the Spice Rack to Steal Your Eyesight?

I want to invite you to follow one of my other blogs at http://medicalvisioncenter.blogspot.com/ for those of you interested in eye health, naturally. This blog has breaking news that will save someone’s eyesight so excuse the departure from what is normally published on this blog, but it is just too important not to share.  Be well! 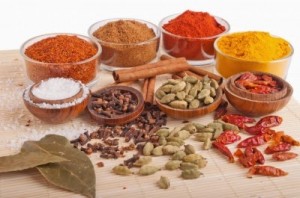 Culinary Indian spices are rising superheroes of the nutritional World. When most of us were growing up, these spices were not a regular part of many of our diets.  Today, though, they are commonly available high-profile healers of the highest order. But if history repeats itself, we can anticipate a raid on powerful molecules found in your spice rack, turning them into drugs available only by prescription or subject to unnecessary regulation. This is one of the reasons the National Health Federation (NHF) opposes Senator Dick Durbin’s Dietary Supplement Act – in this case, to protect manufacturers who encapsulate spices in therapeutic formulations designed to heal serious eye disease and more. As Codex Alimentarius has decided to add a new committee to its roster with the Codex Committee on Spices and Culinary Herbs (CCSCH) in February 2014, the potential for unnecessary regulatory control has NHF concerned.

Curcumin is the main curcuminoid of the popular Indian spice turmeric, which is currently enjoying exalted status as a true panacea for modern-day ills as an anti-inflammatory, antioxidant, and antitumor spice.  Zeaxanthin-rich saffron, the most expensive of spices at $500 a pound, is a proven star in both the Eastern and Western healing traditions for treating macular degeneration. It takes nearly 150 flowers to produce a single gram of dried saffron threads.[1] Even ordinary rosemary is being touted as one of the healing modalities for the potentially blinding diseases of macular degeneration and retinitis pigmentosa.

Several studies of these spices have shown their effective use in the potentially blinding diseases macular degeneration, retinitis pigmentosa, and cataract development as well. In a December 2013 study, “Curcumin: Therapeutical Potential in Ophthalmology,”[2] curcumin proved itself effective against several ocular diseases, such as chronic anterior uveitis, diabetic retinopathy, glaucoma, age-related macular degeneration, and dry eye syndrome. “Unfortunately, because of its low solubility and oral bioavailability, the biomedical potential of curcumin is not easy to exploit; for this reason more attention has been given to nanoparticles and liposomes, which are able to improve curcumin’s bioavailability. Pharmacologically, curcumin does not show any dose-limiting toxicity when it is administered at doses of up to 8 g/day for three months.”  Black pepper and lecithin also improve bioavailability. 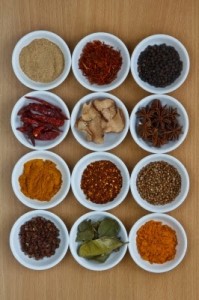 But to truly impact absorption of the healing spices and creating a remedial response, restore the proper balance of bacteria in the gastrointestinal tract which is potentially the greatest source of inflammation in the body. Microbial imbalance leads to increased inflammation, oxidative stress, and impaired immune response and more—which are foundational to potentially blinding eye diseases. A January 2014 study in Cell[3] researched life extension and the diseases related to age-related changes in the gut flora. When bacteria in the gut are in balance, not only is one’s life span extended, but the diseases common to the elderly decrease, leading to a higher quality of life.

From tumors and cancer to cataracts there is little turmeric cannot heal. Speaking with an Indian delegate to Codex recently, a food scientist from the Spices Board, she said that even a poultice made of turmeric and applied overnight would resolve most ulcers and abscesses on the body. Many East Indians eat pickled turmeric daily; NHF wants to ensure that it remains available as a nutritional supplement for those who don’t eat it daily as a part of their dietary pattern.

In another study from PubMed republished on GreenMedInfo’s database in 2008, diabetes was induced in rats but the subsequently administered curcumin-and-turmeric treatment appeared to have countered the hyperglycemia-induced oxidative stress.[4] Blindness is a complication of diabetes. Curcumin will make an effective addition to a diabetic protocol on several counts.

In the July 2012 issue of Evidence Based Complementary Medicine, a longitudinal follow-up study of saffron supplementation in early, age-related macular degeneration reported sustained benefits to central retinal function.[5] Lastly, lowly rosemary comes to the forefront in retinal protection[6] in macular degeneration and retinitis pigmentosa, which has no known therapeutic treatments, so this is exciting indeed.

If you don’t think the drug companies are anxious to swoop in and snatch up these ancient spices and herbs to patent them out of your reach, just look at how GlaxoSmithKline reacted in 2010 when resveratrol’s incredible healing powers were rising and its impact on multiple myeloma was creating excitement for the next super-drug.[7] Observing the incredible potential of resveratrol, GlaxoSmithKline pursued this molecule, skewing its molecular structure in order to patent what was being touted as a “poly-pill” capable of curing anything. What they most likely did not factor in was dose-dependency and ended a trial when their presumably high dose created kidney failure; they may very well have missed their aim of patenting a natural substance that still holds its place well, impacting an important cross section of diseases. But the pharmaceutical model stands as a threat to health and health freedom today as common spices are exhibiting radical healing potential on their own without the structural skewing and we have access to them directly and much more cheaply due in large part to NHF’s protective stance in regards to nutritional supplements at Codex.

It puts NHF on high alert when Codex Alimentarius decides to insinuate itself into your kitchen spice rack by adding a new Codex committee meeting in India in February 2014.[8] According to Sanjay Dave, Codex Chairman, the first meeting will be to frame strategies for quality of culinary spices and promote harmonization to facilitate World trade.  As far as the spice quality is concerned, that deals with issues like physical characteristics, uniformity in color, size, appearance, and packaging, which come under quality parameters.

Safety parameters in spices focus on pesticide residues, mycotoxin contamination, microbiological such as Salmonella, E. coli, and other contamination that is harmful to health. When these issues arise in relation to quality regulation, which again is simply addressing color, size, appearance, and packaging, they will be referred to the appropriate Codex committee responsible for them, such as the Food Labelling, Food Additives, Food Hygiene, Pesticide Residues, Contaminants, and so on, most of which the National Health Federation participates in. This initial Codex committee meeting on Culinary Spices will begin the tedious process of sorting every culinary herb into monitoring pathways handled by appropriate Codex committees on all of the issues from quality to safety. For example, the Pesticide Residue Codex Committee will determine appropriate parts per million or maximum upper limits of pesticide residues which will be adopted globally for purposes of creating harmonization in World Trade when that particular spice is exported.

According to the Spices Board of India, countries such as the United Kingdom, Germany, and Netherlands have laid down cleanliness specification for spices.  The European Spice Association (ESA), comprising members of the European Union, has come out with the “quality minima for herbs and spices.” This serves as a guideline with specifications for member countries in European Union. The European Union has yet to finalize the cleanliness specification for spices and spice products.[9] It is too bad this governing body was not able to achieve a clean, relatively standardized export product without Codex involvement. So while there are some decidedly good aspects to Codex’s goal of harmonization by promoting the assurance that imported spices are clean and free from contaminants, where spices are concerned that have been proven in scientific research to heal many diseases, of the eyes in particular, NHF sees a pathway directly from the kitchen spice rack right to the revolving door of the Pharmaceutical industry in the hopes of patenting these healing spices. This will reduce the power of the average person to control their own health by using these spices for treating disease as World trade and the potential for profits and increased regulatory control at the expense of health reigns supreme.

The threat is not only drug companies lobbying to regulate common, but powerfully healing, kitchen spices but irradiation is an issue as well, which lowers the nutritional content of foods. India is having a problem currently with a lack of integrity in the cleanliness of their spices. Like China, once you gain a reputation for releasing impure product in world trade, you are forever suspect. They are wise to adopt standards and guidelines in many respects if they wish to increase their economy by trading globally. This could have been achieved apart from Codex, however, and should have been achieved nationally. But they have adopted this course and the National Health Federation intends to have a say in how it’s managed as we see the potential pitfalls and loss of control of healing spices currently labeled “culinary.”

Perhaps the most important part of the Indian spice issue is just what happened when GlaxoSmithKline tried to get a patent on resveratrol for use in diabetics. This action threatened to take a valuable healing tool out of the reach of the consumer and leave drug companies and doctors in full control of access and availability. The same could happen with the developing spice market being so effective in healing potentially blinding eye disease with curcumin, turmeric, saffron, and rosemary being potentially regulated as drugs. If NHF can stave it off, so much the better for us all who feel our eyesight is too precious to brook the interference of excessive and unnecessary regulation. NHF appreciates your support (http://www.thenhf.com/page.php?id=19) as we attend many Codex meetings in 2014 to protect you and your family.